Commas: A Guide to the Most Common Patterns

Punctuation Commas: Major Patterns Commas: A Guide to the Most Common Patterns

There are quite a few rules for commas, which is why some people give up in frustration and end up guessing. Yet guessing won’t get you very far.

The good news is that these days there are fairly clear rules for when you should use a comma. If you take your time reviewing the basic patterns and doing the exercises, you will get the hang of it soon enough.

On this page you will find the major patterns for comma usage. For minor uses, please see our separate lesson.

In this section, we will review the following basic patterns: 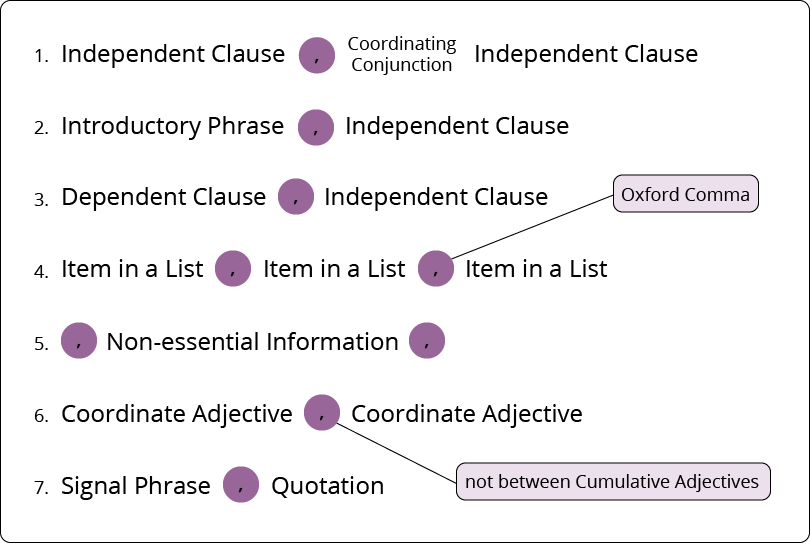 Read on to learn more about each rule.

Between independent clauses joined with a coordinating conjunction

Coordinating conjunctions are those seven little words that tie parts of the sentence together: and, but, for, nor, or, so, yet.  If you use one between two independent clauses, then you can place a comma in front of it:

David was looking for his pencil sharpener, but he could not find it anywhere.

Let’s say you’re a feminist, and it is time to vote—do you automatically vote for a female candidate?

Pele is widely considered the greatest soccer player, but you could make the case that Messi and Ronaldo are up there too.

You can relax this rule if the clauses are very short:

He sanded down the coffee table and then he stained it.

You also don’t need a comma if the second clause is missing a subject. In that case the sentence usually has one subject and two verbs:

El Escorial was built by King Philip II of Spain and is both a monastery and a royal palace.

She wants to join the Shriners and wear a fez.

There are no commas in these examples because you don’t want to stick a comma between the subject and the verb.  The exception is if there is a gap of time between the two clauses:

Trixie trained for the triathlon, yet never officially raced.

So, as you can see, the basic pattern is clear, but there is some room for discretion.

After an introductory word or phrase

Many sentences start out with an introductory word or phrase. These introductory elements are often separated from the rest of the sentence by a comma:

During the Irish Potato Famine, hundreds of thousands of people emigrated from Ireland.

Unfortunately, the sirocco stirred up a dust storm.

While turning the auger, Britney smoked a great big pipe.

Caught with his pants down, Emerson jumped out of the window.

Sometimes we get several phrases before the comma:

After the start of the Protestant Reformation, Martin Luther’s ideas spread rapidly.

Still, a comma is not always advisable:

Yesterday she was fishing for compliments again.

In the beginning was the Word.

After me you can go.

In other words, it’s a judgment call. If a comma creates clarity then use it. If it interrupts the flow, leave it out.

When she marks my essay, she uses red ink the colour of blood.

According to Greek mythology, after Cronos castrated his father Uranus with a sickle, he threw the testicles into the sea.

Here are some more (and less violent) examples:

Whenever Kayla was in a bad mood, Tom told her that he had thoughts of buying her flowers.

Although Pope Joan probably never existed, the idea of a female pope makes for a great story.

If you are baking, can you make brownies?

You can of course relax this rule if the clauses are quite short:

Once you were gone I could not stay.

When summer is over we all go back to school.

On the other hand, if you reverse the order of the sentence and place the dependent clause after the independent clause, then you don’t need a comma. That’s because the conjunction now comes between the clauses and nicely connects them:

I pumped up the tires because they were low.

An Egyptian will have a conniption if you say at his trial that he lives in denial.

Still, you probably won’t be surprised to find out that sometimes a comma is better, especially when there is a pause before the final clause:

I failed the course, though not for lack of trying.

Your drone will get stuck in that baobab tree, when you actually get it off the ground.

So what have we learned? Stick a comma between a dependent and independent clause, but not the other way around. And, of course, both rules can occasionally be broken.

And now we come to the great controversy. When you use commas in a list, do you place one before the final item?

That final comma is called the “serial comma” or “Oxford comma,” and it’s not hard to make up sentences that show why it’s needed.

I celebrated my Bar Mitzvah with my best friends, my mom and dad.

On his trip through Italy, he met the Pope, a rabid soccer fan and an expert on opium.

My reading list includes two books on fertility, The Farmer’s Almanac and The Elements of Style.

Why do these sentences sound awkward? It’s because we might assume that the last two items in the list rename the first. In other words, they function like an appositive.

The truth is that such sentences are rare, and there is a kind of perverse joy in making them up. That said, the trend is to go with the serial or Oxford comma. The one exception is in news publications, where leaving the comma out presumably saves space and makes reading quicker.

So if you want to be safe, punctuate all your lists like this:

The serial comma is preferred by English professors, passive-aggressive types, and fussy pedants who are always rearranging their book shelves.

If information is not essential to the rest of the sentence, then you can stick it in between commas (or between a comma and a period). Here are two quick examples:

Minecraft, my brother’s obsession, bores me to death.

I was born in Sri Lanka, which was then still called Ceylon.

Here the commas act like parentheses or dashes. By contrast, when information is essential we don’t want any commas:

Non-essential information can include words, phrases, and clauses. Here are some examples that will teach you some strategies for figuring out whether the information is essential or not:

Often the extra information is a participial phrase or an appositive phrase that comes right after a noun or pronoun:

Mr. Sinclair, a most respectable and bespectacled man, taught us all geography.

Everyone wearing sunglasses should vacate the building immediately.

In the second sentence, the phrase “wearing sunglasses” limits the meaning of “everyone” so that it now refers to only a specific group of people. It’s no longer “everyone,” but only those wearing sunglasses. By contrast, knowing that Mr. Sinclair is respectable and bespectacled doesn’t change the rest of the sentence.

It often happens that a detail elsewhere in the sentence makes other information non-essential. Here are some examples:

My youngest sister, Faith, dreams of playing in the WNBA.

(We don’t need Mother Teresa’s name to identify which saint is meant. Similarly, the name Skopje gives you enough information to make sense of the rest of the sentence. You could always google the name if you really wanted to know that it’s in Macedonia).

The main character, David Copperfield, is also the narrator.

(Since you can have only one main character, the name is not essential information)

Often the extra information comes in the form of a relative clause. Relative clauses start with that, which, who (and whose and whom). Here are some examples with both essential and non-essential information:

Carl Lewis, who won ten medals at the Olympics, followed a vegan diet.

The person who robbed me had a handlebar moustache and green eyes.

The rhinoceros, which may have inspired the myth of the unicorn, is often killed for its horn.

How much for that parrot that says “billions of blistering barnacles!”?

By the way, most editors prefer to use that for introducing essential information and which for inserting material that can go between commas.

When you use multiple adjectives before a noun, you have to make a choice about whether to separate them with commas:

Why commas in the one example, but not in the other? Because in the first the adjectives all modify the noun separately. They’re called “coordinate” adjectives because you could easily substitute “and” (a coordinating conjunction) for the commas: his uppity and pretentious and obnoxious mannerisms.

This doesn’t work so well for the second example, where the adjectives work together to modify the noun. In fact, the word “bright” doesn’t modify the noun so much as the next adjective (“orange”). That’s why these adjectives are called “cumulative”—they build on each other.

The hard thing is to know whether the adjectives are coordinate or cumulative. There are two quick ways to check:

However, neither of these tests is fail proof, so often you will still have to use your discretion.

There are multiple ways to introduce a quotation, and one of them is with a comma. A comma is appropriate after a short signal phrase:

She asked, “Can I have another raisin bun?”

The comma is particularly appropriate when the signal phrase includes a verb of expression (said, wrote, argued, suggested, etc.).

Previous Lesson
Back to Lesson
Next Lesson
Login
Accessing this subject requires a login. Please enter your credentials below!
Lost Your Password?