Once you’ve paraphrased the text you’re studying, you can move on to a close reading. This is where you figure out how the text creates meaning. What kind of patterns can you spot? Does the text have a certain form (e.g., a genre, plot, rhythm, etc.)?  Is the text unified or are there gaps, contradictions, or ironic moments?

Remember that analysis is more than spotting a simile or metaphor. It’s about understanding how all the pieces of the puzzle fit together.

Every text has a certain shape and form. Here we review the poetic features of Wordsworth’s “I Wandered Lonely as a Cloud.”

This poem is a short lyric, a relatively brief poem that describes the speaker’s emotions. Lyrics don’t so much tell a story as describe a subjective experience. Wordsworth chose this form not only to express his strong feelings about nature, but also because the lyric has a simplicity and directness that itself seems natural.

Each stanza of “I Wandered Lonely as a Cloud” rhymes ABABCC. The last two lines of each stanza thus form a rhyming couplet, which provides a sense of closure after the previous flowing lines.

Wordsworth wrote his poem in iambic tetrameter. An iamb (adjective: iambic) is a set of two syllables where the first syllable is unstressed (u) and the second stressed (/). The word meter describes the rhythm of the poem, and tetra- means four. Iambic tetrameter therefore refers to a rhythm that consists of four iambs (u / u / u / u/).

Wordsworth chose this meter because this stress pattern sounds easy and natural. It fits his Romantic notion that poetic language should avoid artificiality. In addition, the lines are fairly short, which again makes the poem more direct and accessible. 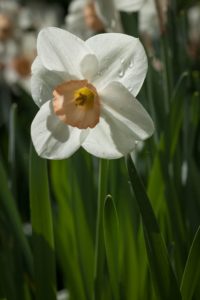 Not every poem uses the same literary devices, which means not only that we have to attune ourselves to a great many poetic techniques, but also that every choice is significant.

“I Wandered Lonely as a Cloud” contains a number of similes and metaphors. The similes occur early in the poem (“as a cloud”; “as the stars”). After that the poem becomes more metaphorical. One of the most pervasive metaphors is that the flowers are dancing. The word is used in some form in every stanza of the poem (dancing, dance, danced, dances). The whole poem, then, is full of movement.

Most of the metaphors involve an element of personification. Personification means that the poet attributes human qualities to non-human things. To Wordsworth, the daffodils look like a “crowd” or a “host” of people. They cheerfully toss their “heads” (12), know how to dance, and provide good “company” (16), which is more than can be said of some individuals.

Why does Wordsworth use personification so extensively? His point is that he feels more at home in nature than in society; he is in fact not “lonely” (1) at all when he spends time gazing at flowers.

A lot of readers have found this a rather odd attitude. Flowers are nice enough, but isn’t Wordsworth exaggerating a bit? He certainly is: the poem is full of hyperbole, which is a poetic term for the kind of exaggeration that is used for emphasis and is not meant to be taken literally. Wordsworth claims that he saw “ten thousand [daffodils] … at a glance” (11), and that “they stretched in never ending line” (9). Seems a bit over the top, doesn’t it?

Yet Wordsworth’s tone is serious. He describes the scene as if this is how it really was. And if we agree with the Romantic idea that our understanding of nature is always subjective, then we cannot really fault Wordsworth for using such fanciful imagery. From an emotional point of view this is exactly what Wordsworth saw. He literally felt as lonely as a cloud before feeling as if he might dance with the daffodils. Such is the power of the imagination.

What is most remarkable about the poem is that despite all the hyperbole, the poem still feels natural and unforced. It’s as if Wordsworth is simply talking to us. This is partly the effect of enjambment, a poetic device where the poet does not conclude his thought at the end of each poetic line. Instead the sentence continues across the end of the line without a pause. Here, for example, are the opening lines of the third stanza: “The waves besides them danced; but they / Out-did the sparkling waves in glee” (13-14).

Ultimately, however, it’s up to us whether we are willing to indulge Wordsworth in his imaginative flight or if we’re too jaded to understand how a bunch of wild daffodils can lift a person out of depression. The truth is that we’re not just reading the text: the text is also reading us, exposing exactly who we are and what we believe.

Wordsworth’s poem consists of two sections. The first three stanzas describe how the speaker felt in the moment; the last stanza relates how the memory of the scene subsequently affected him. In both instances, the speaker feels “lonely” (1) or experiences “solitude” (22), but each time the daffodils give him pleasure.

The scene also retains a kind of freshness and an ability to surprise. Wordsworth comes upon the daffodils “all at once” (3), and ever after their memory comes to him in a “flash” (21). Nature seems to sneak up and catch him unawares.

However, there are some differences between the two experiences. When Wordsworth first sees the daffodils, he is overwhelmed by the sight, and in the spontaneity of the moment he doesn’t recognize how precious the experience truly is (17-18). By contrast, the memory of the event may not be as intense, but the poet is more self-conscious. He knows now “what wealth the show … had brought” (18).

By contrasting the two experiences, Wordsworth is exploring a question that fascinated the Romantics: if the fullest experience of nature is to lose oneself completely in “gazing” on a beautiful scene, does the realization that one is enjoying oneself not shatter illusion and end the trance? Similarly, how can a poem capture such a moment accurately? Composing a poem is a rather active process involving a great deal of thought and revision, whereas the experience itself leaves the poet passive and overwhelmed.

While the poem raises these questions, it never treats them as a serious problem. The movement from the first three stanzas to the last one is seamless. Despite becoming more self-aware, the poet continues to find joy in nature and makes the poetic process seem effortless and spontaneous.

Perhaps that is what makes this one of Wordsworth’s finest poems: not only does it show that nature can be magical and that our imagination adds to the effect, but it also allows us to fully immerse ourselves in nature without feeling embarrassed or too self-aware.

Our close reading has not covered every last aspect of the poem–it merely shows what is possible. In the next lessons we will start to provide some context and look at the text through different critical lenses. Whereas a close reading works primarily with the patterns found in the text, there are many more perspectives that can enrich our understanding of the poem.