Having done a close reading of our sample text, Wordsworth’s “I Wandered Lonely as a Cloud,” as well as looked at the poem’s historical background, we are now in a position to sample some specific perspectives on the poem.

Each theoretical approach allows us to see features of the poem that we might not have noticed otherwise.

Our first interpretive lens, and the one we’ll focus on in this lesson, looks at the poem in relation to aesthetics, the study of beauty. 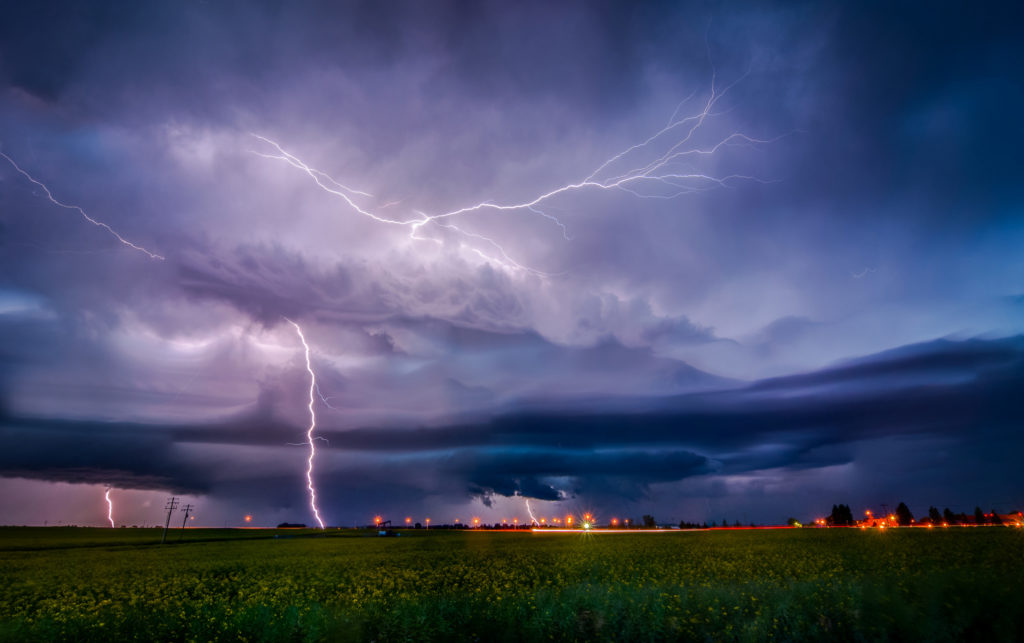 One of the greatest thrills is to experience the sublime. The sublime is a moment of complete awe. It sends shivers down your spine. It transports you to a different level and provides a kind of emotional high.

Many people live for these moments. When you climb a mountain and reach the summit, the feeling of conquering the landscape and testing your own limits can be wonderful. Add to that a spectacular view and perhaps some fear of falling down a steep precipice, and the experience can be riveting.

Other sublime moments might include being at a massive concert and being swept away by the music; gazing at the stars and feeling awed by the size of the universe; understanding the intricate complexity of a single molecule; performing an amazing jump on your snow board; or watching an epic scene from The Lord of the Rings or Star Wars.

The Romantic poets were particularly keen on experiencing the sublime–and on having you experience it with them. Although the concept was first explored in a treatise by the first century writer Longinus, it received increased attention in the 18th century. Here are the authors and titles of the principal texts on the sublime:

You can already tell from the titles that Burke and Kant made a distinction between the beautiful and the sublime. A bunch of flowers might be beautiful, but it wouldn’t leave you awestruck or spellbound. It was Edmund Burke who suggested that what makes the sublime different is an element of terror. Here is his famous definition of the sublime:

Whatever is fitted in any sort to excite the ideas of pain and danger, that is to say, whatever is in any sort terrible, or is conversant about terrible objects, or operates in a manner analogous to terror, is a source of the sublime; that is, it is productive of the strongest emotion which the mind is capable of feeling. I say the strongest emotion, because I am satisfied the ideas of pain are much more powerful than those which enter on the part of pleasure. (36)

If you want an example of what Burke is describing, just go stand at the edge of a cliff. There’s a part of us that finds enjoyment in putting ourselves in danger.

For Burke, then, the sublime is associated with fear, with mystery and darkness, with the terror that comes from the contemplation of the vast and infinite. For Burke, the most sublime being is God, though not the divine being contemplated by the rational mind, but more the poetic and enigmatic figure one encounters in the Old Testament book of Job.

Before we look at how Wordsworth makes the daffodils seem sublime in “I Wandered Lonely as a Cloud,” we need to know one more critical term: bathos. In the world of entertainment, bathos is the opposite of the sublime: it describes an anti-climax.

For hardcore Star Wars fans bathos would be whenever Jar Jar Binks appears on screen.

For many students of literature, a good example would be the fight of the angels in Book 6 of Milton’s epic poem Paradise Lost. Things become slightly ludicrous when the fallen angels invent cannons. They chain together the cannon balls and fire them at the good angels. Milton points out that if the angels had not been wearing armor, they might have dodged easily. In fact, the cannon balls could have gone right through them, no harm done. But because of their armor many of the good angels get knocked over. The whole scene is rather comical, and some critics have even argued that the entire battle is underwhelming, for the outcome is never in doubt. At the end Christ routs the bad angels without really having to try.

One of the problems is how we might determine when something is either sublime or a moment of bathos. We notice this problem in Longinus’ treatise On the Sublime. Longinus argues that some things may seem impressive, but are actually hollow and false. Think of a brass band playing a marching tune in the streets. Longinus called that kind of noisy display bombast. But who is to decide when something is sublime? There is certainly something subjective about aesthetics, and Immanuel Kant even went so far as to suggest that men are more attuned to the sublime than women (women are apparently more interested in the beautiful).

In 1811-12, Wordsworth himself wrote an unpublished essay on the sublime. Matthew Brennan points out that Wordsworth splits the sublime into a negative and a positive type. Only the negative version of the sublime depends on terror (à la Burke) and both types create a powerful sense of unity and transcendence (142).

Wordsworth was thus clearly interested in describing and creating a sublime experience, and yet it is still surprising that in “I Wandered Lonely as a Cloud” he would describe the daffodils as not just beautiful, but also as sublime. It is the second stanza (added in the 1815 version) that does most to create this effect. By comparing the daffodils to twinkling stars, Wordsworth widens the scope and makes the scene seem epic. The daffodils seem innumerable as they “stretched in never-ending line” (9), out of sight. The inability of the mind to fully comprehend and contain the scene causes a sense of wonder. Even a “single glance” reveals “ten thousand” (11) daffodils! As Edmund Burke pointed out, the sublime is usually related to the contemplation of the grandeur of the universe.

Wordsworth’s lofty diction also adds to the sublime. By using personification, Wordsworth transforms the daffodils into his living and breathing companions, dancing and fluttering with happiness. As a number of critics have pointed out, by using the word “host” he even implies a comparison to God’s angels, who are traditionally called the “heavenly host.”

In the third stanza, Wordsworth also introduces an element of competition, a frequent attribute of the sublime. The daffodils strive with the waves of the lake for the title of being the most happy: “The waves beside them danced; but they / Out-did the sparkling waves in glee.”

The last stanza suggests that not only is nature sublime, but so are the workings of the human mind. Geoffrey Hartman has pointed out that in Wordsworth’s poetry “[a] new attitude toward consciousness—a radical consciousness of consciousness—is brought to light: Wordsworth is truly a subjective thinker” (8). The way in which the “inner eye” (our imagination) allows us to revisit the past is in itself sublime.

So does the poem reach the lofty heights of the sublime or is it rather an example of bathos?

Wordsworth’s friend Samuel Taylor Coleridge found the poem somewhat disappointing. He thought that the daffodils might be considered beautiful, but not sublime. He calls Wordsworth’s efforts a kind of “mental bombast” (136). In other words, Wordsworth’s intellectual effort and elevated diction do not match the subject matter.

According to Coleridge, the truly sublime “joy of retrospection” (136) is not the memory of a few daffodils but “the images and virtuous actions of a whole well-spent life” (136). Virtuous action is more sublime than a few flowers.

In defense of Wordsworth, however, we can say that it is not simply the flowers themselves that are sublime. We are also awed by the our human capacity for imagination. This is not just a poem about nature; it is also a poem about the mind. The poem makes us realize the wondrous nature of a mind attuned to beauty and feeling.