You don’t have to be a Marxist to do a Marxist analysis of literature.

In literary theory, a Marxist interpretation reads the text as an expression of contemporary class struggle. Literature is not simply a matter of personal expression or taste. It somehow relates to the social and political conditions of the time.

How it relates is of course up for debate. Is the text a mirror of social values? Is it a form of propaganda for the ruling classes? Can literature challenge social norms? These are the questions that preoccupy Marxist literary critics.

In what follows we’ll first sketch out some broad principles of Marxist analysis before turning to one possible reading of Wordsworth’s poem “I Wandered Lonely as a Cloud.”

Many of the grand theories developed in the second half of the nineteenth century are deterministic in nature. Charles Darwin’s theory of evolution suggests that much of our behaviour is determined by our genes. Sigmund Freud argued that our lives are affected by our unconscious, and that our psychological and sexual wishes and desires are much affected by the formative influences of our childhood. Similarly, Karl Marx theorized that human beings are the product of their social and economic environment. 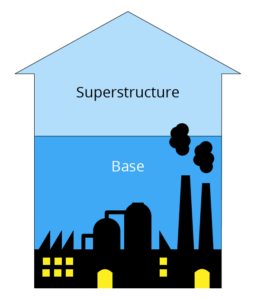 Marx called the economic conditions of life the base or infrastructure. The base includes everything from technology and raw materials to the social organization of the workplace.

This economic base has a powerful effect on the superstructure, Marx’s term for society, culture, and the world of ideas.

Literature, for Marx, belongs to the superstructure (along with law, theology, politics, etc.). The challenge, then, is to see how it is influenced by the economic base.

Marx himself often treated literature as simple propaganda for the ruling classes. There is some truth to this. For instance, in a Feudal society, people loved chivalric romances, stories about knights who fight for honour and win their lady’s love. In today’s capitalistic society, many people enjoy watching James Bond movies, which celebrate the glamorous lifestyle of the modern gentleman, the lady’s man who dresses in expensive clothes and drives fast cars. In these cultural fantasies it is the aristocrat who comes to our rescue and saves us from imaginary villains that seek to destroy the status quo.

Yet many later Marxists were unhappy with Marx’s somewhat naive characterization of literature as propaganda. For instance, the Italian communist Antonio Gramsci used the concept of hegemony to describe the way in which ideology (a system of beliefs) is not simply oppressive and coercive, but also involves an element of consent. There has to be some reason for me to go see a James Bond movie even when the lifestyle depicted might be unattainable.

More recently, the cultural critic Raymond Williams suggested in Marxism and Literature (1977) that every historical time period has competing hegemonies. The dominant hegemony promotes the interests of the ruling classes, the residual hegemony defends the culture and belief system of the previous era, and the emergent hegemony shares revolutionary ideas that may later become the dominant hegemony.

Literature thus reveals to us the spirit of the times, the issues that mattered to people. Literature (and entertainment) is about much more than enjoyment or escapism: it is a manifestation of class struggle.

Marxist theory may seem far removed from Wordsworth’s poem “I Wandered Lonely as a Cloud.” Yet some surprising connections are still possible.

In fact, one recent Marxist reading of the poem is found in David Simpson’s book Wordsworth, Commodification and Social Concern: The Poetics of Modernity.

As Simpson points out, Wordsworth does place a value on the daffodils. Wordsworth writes, “I gazed–and gazed–but little thought / What wealth the show to me had brought” (17-18). As Simpson notes, the daffodils “provide a wealth that is metaphysical and not material” (169).

Yet why use the word “wealth,” and what is its significance? From a Marxist perspective, the poem can be considered both a criticism of materialistic attitudes and a reflection of the language of commodification.

On the one hand, Wordsworth turns to nature to escape from the world of capitalism and commerce. The daffodils are “golden” (4), and that is the only currency that brings him true “wealth” (18). Wordsworth leaves behind human society, and finds his true self in solitude and in the company of the flowers. From this angle, the poem can easily seem escapist and reactionary. Indeed, Marxist critics such as Terry Eagleton have read the entire Romantic movement as causing a radical split between the private, subjective world of literature, and the public world of politics. Literature increasingly becomes a private matter.

Yet this move away from society ironically produces the very individualism that underpins capitalism. There is a kind of selfishness in the way Wordsworth uses the landscape for his own imaginative reverie. Simpson also reminds us that the word daffodil is but a different name for narcissus, a flower named after the mythological Narcissus, the young man who fell in love with himself.

In addition, the adoration of the flowers is rather similar to what Marx called the fetishism of commodities (Simpson 172). When we treat traded goods as having an intrinsic value, we are guilty of fetishism. We do this all the time. We endow commodities with personalities and act as if our lives are incomplete without them. We have to have the latest gadget or toy, even though the value of these things is artificial and is driven by a kind superstitious faith in the idea that prices are natural. In the same way, Wordsworth personifies the daffodils as animate, living beings, and he ties his own happiness to theirs. Like a commodity, the scene is best enjoyed in secret, in some private or internal space (the mind, the home).

The economic language of the poem makes the poet a wealthy man. Yet the poet is also the banker who pays himself with the riches of nature. As Simpson observes, in this system “a high rate of interest is assured and no one else can drive down prices because they cannot get into the market” (173).

Wordsworth’s poem thus tries to escape the effects of capitalism, but cannot avoid its logic and language.

You might be a bit skeptical after reading this Marxist interpretation. Are we not making too much of a few words in the poem? This is a valid objection, and a thorough Marxist analysis would have to provide further proof from the rest of Wordsworth’s poetry. Nevertheless, even if we don’t accept the entire Marxist interpretation provided above, at least we can see what is possible. A good Marxist reading draws our attention to details in the poem that we might have glossed over otherwise.