Kenneth Burke’s Pentad is a popular heuristic that allows us to analyze motivation in any dramatic situation. At a basic level, the Pentad functions like the journalistic questions (who? where? what? when? why? how?). However, the Pentad’s true function has more to do with the relationship between its five terms. Burke argued that motivation cannot be properly explained as having a single or simple cause. In a dramatic and rhetorical situation, motivation is a matter of the relationships (the ratios) between terms.

Burke explained the Pentad in his book A Grammar of Motives (originally published in 1945):

“[A]ny complete statement about motives will offer some kind of answers to these five questions: what was done (act), when or where it was done (scene), who did it (agent), how he did it (agency), and why (purpose)” (p. x).

When represented visually, the five terms are placed at the points of a star (in any order): 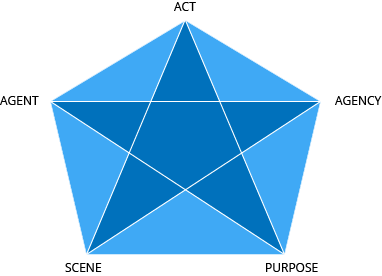 This morning, Tom got so bothered by the lack of light in his living room that he grabbed a chainsaw and cut down the apple tree in front of the window.

We can organize the information as follows:

Agent: Tom
Act: Cutting down the apple tree
Agency: The chainsaw
Scene: Morning (when), in the garden (where)
Purpose: To let more light in

You can see why Burke talks about a grammar of motives: analyzing a sentence in this way is not that different from parsing a sentence for parts of speech.

The real question, however, is where we locate motivation in all of this. If we describe the situation from Tom’s perspective, then we would say that he made a decision to cut down the tree. If we focus on the scene, by contrast, then we might say that the lighting (or rather the lack of light) drove Tom to grab his chainsaw.

Burke’s Pentad thus allows us to notice all the elements of a scene or composition, and it forces us to decide what has caused some action to take place.

The value of Burke’s Pentad is easily demonstrated by analyzing a photograph or painting. Take Alfred Eisenstaedt’s famous photo of a couple kissing on Victory over Japan Day in Times Square (1945):

At the time of the photograph, the identities of the sailor and young woman were not known. The photo was printed in Life magazine, accompanied by the following caption:

“In New York’s Times Square a white-clad girl clutches her purse and skirt as an uninhibited sailor plants his lips squarely on hers” (“V-J Day”).

The Pentad helps us to spot the scene (V-J Day in New York’s Times Square) as well as the agents (girl and sailor), the purpose (celebration), and the act and agency (the kiss).

That is, of course, if we focus on the centre of the picture. If we zoom out a bit we might notice many other agents and acts. In fact, even the photographer is acting by snapping a photo. The Pentad therefore tells us as much about our priorities and focus as about the object in view.

The Pentad also demonstrates that accounting for motivation is rarely a simple matter. The sailor didn’t know the girl, and so feminist critics have argued that the kiss was an act of sexual assault. She was simply walking along before being grabbed by a random stranger. Others suggest that the sailor shouldn’t be blamed. He had been drinking to celebrate the end of the war, and was so overjoyed (as well as thankful for the work of nurses in the war), that he kissed this young woman (who looked like she was dressed as a nurse). We can thus easily ascribe motivation to the scene itself–the circumstances of joy and jubilation–that brought these two young people together. In fact, we might find motivation even further afield, in the romantic motif of the hero who can sweep a girl off her feet–a motif common to western culture. Before we know it, we’re studying sociology.

The Pentad is most useful when we look for the relationships (ratios) between our five terms. As Richard Coe has pointed out (p. 82), a good strategy is to pick a topic and one term (e.g., Act) that captures it: 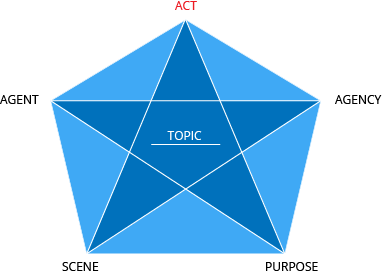 For example, let’s say that our topic is “students skipping classes,” a situation we can classify as primarily an act.

We can now explain this action by creating the following ratios:

Agent-Act: The act is the result of the agent’s motivation.

Ex. The students were lazy. That’s why they skipped classes on a regular basis.

Agency-Act: The act is the result of the available tools or means.

Ex. Since no buses ran that early, the students couldn’t make use of public transport to get to class. That’s why many skipped class on a regular basis.

Scene-Act: The act is the result of the setting and circumstances.

Ex. The school is right beside a beach. Can you blame young people for being drawn away to admire the local scenery?

Purpose-Act: The act is the result of a particular purpose.

Ex. The students skipped class because skipping class is fun.

Act-Act: The act is the result of another act.

Ex. In the first class, the teacher embarrassed one of the students, so the students felt entitled to skip class.

As you can see from these possibilities, the Pentad helps us to question motivation. It reveals that many explanations are possible.

The Pentad works particularly well for dramatic situations that involve human agents. It is less useful in describing scenes of nature. In addition, to use a Pentad properly we have to investigate the relationships (the ratios) between the five terms. The Pentad is meant to stimulate complex explanations of motivation. Rather than reduce causality to a simple cause, the Pentad makes us realize that human action has many competing explanations.