Capitalize the first word of each sentence:

We watched the children playing on the beach.

The tennis ball doesn’t bounce much.

This including quotations that are full sentences:

Capitalize all proper nouns. A proper noun, as you might recall, is a specific person, place, or thing:

Mary and Sam visited the cathedral in Albi.

In 1608, Samuel de Champlain founded the city of Quebec.

Note that some parts of foreign names are not capitalized (the de in Samuel de Champlain).

There is one major exception: the word biblical (from Bible) is not capitalized.

Even trickier are modern and modernist (related to Modernism), and by extension postmodern. These are often not capitalized, even when they refer specifically to something from the modernist period. The reason is that they are so often used in a more generic sense that they’ve become common adjectives.

A lot then depends on the conventions of the field you’re working in. For that reason, everyone should write medieval, whereas you will come across both Renaissance and renaissance as adjective forms. In fact, the latter is mandatory for more distant derivatives, such as when we speak of a renaissance man, someone who has a broad skillset.

So take the time to become familiar with your field, think about how generic the reference is, and, above all, be consistent.

Treat the God of monotheistic religions such as Judaism, Christianity, and Islam as a proper noun:

I believe in the God of Abraham, Isaac, and Jacob.

On the other hand, if you’re talking about a specific deity from a pantheon of gods, use lowercase form:

When it rained, their god was said to be spitting.

Venus was the goddess of love.

You have more freedom when it comes to pronouns derived from God. It used to be more common to capitalize such pronouns out of respect:

God cares for all His creatures.

This is optional, however, even within some religious circles.

If a title precedes a name it is usually capitalized:

Doctor Hagen gave me a clean bill of health.

However, when titles are by themselves they are only capitalized if they are of very important people (e.g., a President or Pope):

The doctor gave me a clean bill of health.

It’s up to you to determine what constitutes high rank, but generally only political and religious leaders receive special treatment. In addition, even these special titles are not usually capitalized in the plural:

Words that describe relationships should be capitalized only if they come right before the name or take the place of the name:

We all hoped Mother would enjoy her birthday.

In all other cases relationship words do not need capitals:

Her father was late as usual.

If you add a title to an essay, poem, sculpture, or any sort of creative work, it’s customary to capitalize important words:

Blind Man Sitting at the Corner of the Round Table (sculpture)

For more information about how to determine which words deserve capitalization, see our page on titles in the section on MLA guidelines.

Finally, let’s review some instances when capitals are not necessary.

The seasons of the year (winter, spring, summer, fall) are not capitalized.

While the title of a specific course is capitalized (e.g., Economics 101), general references to an area of study are not:

She was taking an accounting course.

The exception is language courses, since languages are always capitalized:

I love my French course.

The directions of the compass are not capitalized:

If you head south, you will come to the main highway.

However, if a direction is used as a place name you can capitalize it:

They are moving to the Pacific Northwest.

The East is a much weaker conference.

Whereas most brand names are capitalized (like Proper Nouns), some brands have become common words in the language:

Could you pass me a kleenex?

He drives the zamboni.

The English language has fairly precise rules for capitalization, but every so often you’ll have to make a tough choice. Hopefully this page will make that choice an informed one. 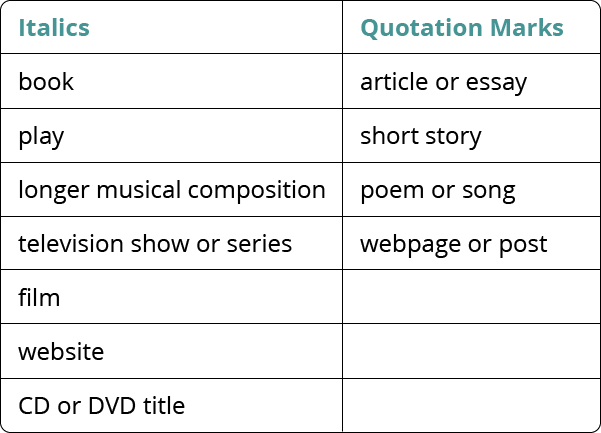 This page summarizes a bunch of rules that relate to the use of numbers in academic writing. In general we have followed the guidelines set out by the Modern Language Association (MLA).

The big question with numbers is whether to write them out or use numeric form:

To answer that question you should ask a few more specific questions:

As we answer these questions we’ll see that there are four criteria to consider: length, specificity, frequency, and clarity.

The basic rule is that if you can write out a number in one or two words then there’s no need to use numeric form:

By contrast, numbers that would take three or more words to write out should be written as numerals:

Note that hyphenated numbers between twenty-one and ninety-nine are treated as one word. Also, round numbers higher than a million can be written in a combination of words and numerals:

Dinosaurs are said to have gone extinct 65 million years ago.

You can break the previous rule if you’re using certain kinds of numbers. These are numbers that are used for specific kinds of measurements, dates, statistics, and so forth. Here are some examples:

You might think of these numbers as more detailed or technical in character. In such cases you can usually use numerical form.

Again, there are always exceptions. For instance, if it’s easy to express a monetary amount in words you can do so (e.g., three cents, ninety dollars).

Out of the 23 students, 15 returned the permission slip, 6 forgot and 2 refused to have their parents sign anything for them.

However, this is very much a judgment call. If it’s easy enough to spell out the numbers then do so.

Finally, you can sometimes mix written and numeric form to create clarity:

He made five 3-pointers in a row.

So to sum up what we’ve learned, spell out numbers of one or two words unless the numbers are more specific in nature, you’re using quite a few numbers in a row, or you need to provide clarity.

Starting with a number

Don’t start a sentence with a numeral. Spell it out or change the word order:

If you’re dealing with a range of numbers, don’t shorten the second number for numbers under a hundred:

For a range of numbers higher than 100 you should provide at least the last two digits of the second number:

Of course it may often be necessary to provide more information:

You can add some clarity to large numbers by using a comma after every three digits:

However, this rule does not apply to specific numbers such as addresses or dates.

Roman numerals are not used as often as they used to be. For instance, in citing plays, references to act, scene, and line numbers are now generally given in arabic numerals (e.g., 2.3.15-16), though roman numerals are sometimes still allowed.

You will see roman numerals used for the pages of prefaces and prologues. They are also sometimes used to count the pages before proper pagination starts (e.g., pp. v-vii). When you’re dealing with such numerals, don’t change them to arabic form.

Roman numerals are also sometimes used in outlines (though this is not mandatory):

I. Introduction
II. The History of Photography
A. The Daguerrotype
…

In addition, roman numerals are used in some names:

The MLA Handbook (8th ed.) recommends that in citations dates should be given in the format day-month-year:

The rationale is that by not using commas you can maximize space. Who knew that one or two commas would be a big deal?

Elsewhere you can use a different format if you like. The main thing is to be consistent. A common way of writing dates is month-day-year:

Note that if your sentence keeps going after such a date you’ll have to provide another comma after the year.

The time of day can be given in different ways:

As long as you’re consistent, either of these formulations is acceptable.

Note that if you use the expression o’clock, the number is usually spelled out too (e.g., five o’clock).

If you have no clue how roman numerals work, here is a quick overview. Let’s start with some basic numbers:

You’ll see these in uppercase or lowercase form.

By combining the numbers you can make other numbers. One way to do so is by placing a smaller number in front of a larger number. The effect is similar to subtraction:

On the other hand, if you place the smaller number after the larger number then you’re adding the two:

You can also combine these two methods:

There are a few more rules for adding and subtracting, but hopefully this clarifies the basic principles.